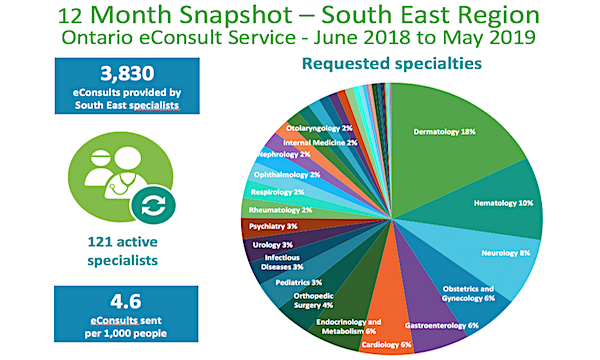 “When we began using eConsult as a pilot project in February 2017, our specialists could only be contacted by primary care providers from within our region,” explained Lacey Cranston, eConsult Regional Coordinator for the South East LHIN.

“When eConsult became a provincial program in June 2018, it allowed our specialists to connect with clinicians from across Ontario. Many now regularly provide much-needed advice to physicians in rural and remote areas.”

Of the 96 specialties and sub-specialties available in the South East LHIN, the top five most requested are:

The South East LHIN is currently leading the province, with respect to the number of consults sent on the Ontario eConsult Service per 1,000 people, at 4.6. The provincial average is 1.44. Of the specialists answering consults on the provincial service, approximately 25% are from our region.

Between April 2018 and March 2019, specialists in our region spent a total of 38,541 minutes answering eConsult queries. This averages out to 453 minutes per specialist annually, approximately 37 minutes per month — or nine minutes per week — per physician. The average specialist response time to an eConsult request is three days.

To date, the reported referral avoidance rate for eConsult cases, across all specialties, is approximately 40%.